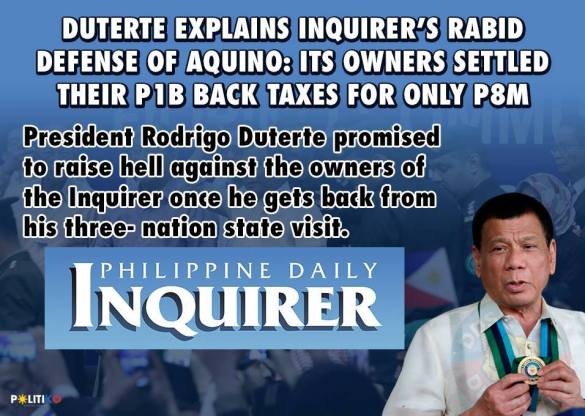 MANILA, Philippines –  After giving the Philippine Daily Inquirer a tongue-lashing, President Duterte is now accusing its owners of not paying billions in tax dues.

Duterte said the donut business of the Prietos, the family that owns the newspaper, did not pay the proper taxes during the previous administration.

“Inquirer owns Dunkin’ Donuts. Did you know that? It had tax dues that were settled during the time of (former internal revenue commissioner) Kim Henares. They did not pay anything or only paid less taxes,” the President told reporters in Palawan yesterday.

“That’s true. The oligarchs are rich. They control the airwaves. They feed us garbage news,” he added.

The Prietos own Golden Donuts Inc., the exclusive Philippine franchisee of the international brand Dunkin’ Donuts.

Asked to clarify his Monday deadline, Duterte changed the topic.

Othello Dalanon, the complainant, said he learned about the tax deficiencies after examining the donut company’s financial records for 2007.

Henares has denied the accusation and claimed that Dalanon made a wrong assessment of the company’s tax dues.

Duterte also accused television network ABS-CBN of not airing his advertisement even after accepting his payment for airtime.

“They accepted the money but they never showed my (ad),” he said. “Until now, there is no offer to reimburse or to return the money. Ganon ka-walang hiya ‘yang mga p***** i** mga oligarchs na ‘yan. Totoo (That’s how shameless these sons of b****** oligarchs are. That’s true).”

Duterte also chided ABS-CBN for airing a negative ad that featured children even if the court issued a temporary restraining order. He said those who were behind the advertisement committed “child abuse.”

The President has repeatedly assailed the Inquirer and ABS-CBN for their supposed unfair coverage of him. He also chided the two news outlets for reporting about allegations that he has millions in undeclared wealth.

Despite being badmouthed by President Duterte, ABS-CBN Corp. expects the renewal of its franchise to be unaffected by political issues.

Although the expiration of ABS-CBN franchise is still three years away, Lopez said “we are now registering with the House of Representatives.”

On Duterte’s tirades, Lopez said even previous administrations had issues with the media in general and with ABS-CBN in particular. “It is part and parcel of our work being in a media institution,” he said.