The memorandum obtained by Rappler was supposed to have been given to Duterte by Evasco during a one-on-one meeting in Malacañang on Monday, April 16.

In the document, Evasco said Aquino, without approval of the NFA Council, sold 10.4 million kilograms of NFA rice meant for Region VIII to chosen Bulacan rice traders for P235 million.

The deal was disadvantageous to the government as it had purchased the rice for P261 million “for specific rice consumers – poor communities in Region VIII.”

The scheme was one reason why there was a sudden decline in NFA’s buffer stock in Eastern Visayas. The kilograms of rice sold to private traders is “equivalent to a buffer of 3-days-to-last,” reads the memorandum.

With the Aquino-sanctioned pull-out, the region’s buffer stock was reduced to less than a day’s worth of stock.

The memo included the selling price bulletin issued by Aquino to prove this. It also attached a letter from an NFA official protesting Aquino’s move.

“The official further urged the Administrator to distribute the rice reserves to provinces that need buffer stock replenishment and not sell it to private retailers. Nonetheless, the NFA Administrator proceeded with the sale,” wrote Evasco.

The sale proceeded despite the special mandate given to NFA to ensure higher reserves for Eastern Visayas because it is in the typhoon belt and thus most vulnerable to food security threats.

Evasco slammed Aquino for acting as if diverting NFA rice stocks was solely his prerogative.

“The NFA Administrator arrogated unto himself the exclusive discretion of determining the allocation and recipients of NFA rice stocks without the slightest regard to the guidelines and procedures that safeguard the interest of the public,” said the Cabinet Secretary.

Why to Bulacan rice traders?

The 4 traders bought a total of 45,906 bags of rice intended for Eastern Visayas.

Evasco pointed to one possible reason for the supposed preference for Bulacan traders – Aquino’s wife comes from San Miguel, Bulacan. 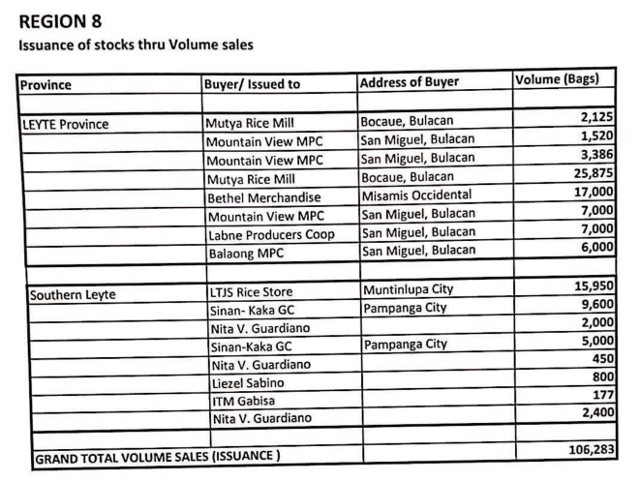 ANOMALIES. A portion of Evasco’s memorandum for President Rodrigo Duterte details how many bags of NFA rice were sold to private rice traders

Some Bulacan cooperatives not qualified

Evasco also called attention to the “suspiciously high number of cooperatives from San Miguel, Bulacan” given quotas or allocations to import rice under the Minimum Access Volume (MAV).

Thirty-nine out of the 294 entities that applied for rice importation quotas are from San Miguel.

Of these, 22 are not authorized to engage in rice importation, said Evasco, using as basis financial statements that prove “they are not financially fit to shoulder the cost of importation.”

The NFA Council had also gotten wind of Aquino’s order to pull out NFA representatives in the ports of entry of NFA rice.

The order, said Evasco, is “grossly contrary” to NFA Council guidelines requiring the presence of an NFA employee during the arrival of imported rice as a way to ensure transparency.

Also attached was a letter from an NFA regional official saying that their office would be “carrying out the order under protest.”

Aquino, however, had reasoned that the NFA’s legal department had merely recommended that future terms of reference and guidelines should be revised to allow pull-out of NFA personnel in ports of entry.

Evasco’s meeting with Duterte and his memorandum come after the President defended Aquino and expressed trust in him.

Duterte had also expressed an intention to “abolish” the NFA Council, a move seen to benefit Aquino. However, after being told by Executive Secretary Salvador Medialdea that this could not be done without Congress, Duterte said he would transfer the NFA to the Office of the President instead and would assign Agriculture Undersecretary Bernadette Romulo-Puyat in charge of rice importation.

Both decisions render the NFA Council obsolete in terms of decisions on rice importation.

Senators have slammed Aquino for supposedly causing panic and the increase of rice prices when he publicly declared a rice shortage.

Some lawmakers have even called on Aquino to resign and criticized Duterte’s desire to abolish the NFA Council. Evasco himself, in March 2017, had asked Duterte to fire Aquino, to no avail. – Rappler.com

The Liberal Party, together with opposition allies, is aiming for 8 out of the 12 contested senatorial seats for 2109. Since there were 4 LP senators elected for six year terms in 2016, that would add up to 12 (for 2019 – 2022) which is one-half of the available Senate slots. It seems like WISHFUL THINKING on the part of the badly discredited Liberal Party (if poll surveys are to be believed). Popular re-electionist senators (Koko Pimentel, Cynthia Villar, Nancy Binay, Grace Poe, JV Ejercito and Sonny Angara) would be running under the Administration PDP Laban and/or Hugpong ng Pagbabago (of Sara Duterte). Loyal Duterte supporters led by Davao City Mayor Inday Sara Duterte (although the Presidential daughter still denies aiming for national office in 2019), PCOO Asec Mocha Uson, SAP Bong Go and PNP’s Bato De La Rosa would vastly improve the chances of the Administration candidates winning 8 or more Senatorial seats (thus reversing the Liberal Party prediction).

It is customary in Philippine elections for the opposition candidates to dominate mid-term (non-presidential) elections but at this stage of the ball game, with the 2019 polls scheduled in May, President Duterte still enjoys high acceptance ratings which should rub off on his Senate line-up. The opposition has a little over a year to ratchet up the fireworks but they have, so far, failed to dent the Duterte popularity among the vast majority of the Filipino electorate.

Senator Francis “Kiko” Pangilinan has pressed for a “strong” opposition coalition in 2019 that would unite, among others, against alleged extra judicial killings (EJKs) and human rights abuses in the country.

“Democracy demands dissent. We need a strong opposition to ensure that our democracy remains vibrant,” Pangilinan, president of Liberal Party (LP), said in a statement issued on Tuesday.

The LP, he said, hopes to help build the “broadest coalition of groups and individuals united behind defending our freedoms and our civil and political rights.”

“We hope this coalition is one in ensuring our economic development is not sidelined by corruption and human rights violations,” said the senator, “Resistance is our movement. We must vigorously resist the slide to authoritarianism and anti-democratic rule.”Pangilinan clarified that the LP would only help build this coalition, which was dubbed as the “Resistance Coalition.”

“LP alone cannot achieve this and we will need to work with other groups and forces willing to unite and to resist extra judicial killings and human rights abuses, the undermining of our sovereignty in the West Phil Sea and the continuing rise of prices of basic commodities among others,” he said in a text message.

“A resistance coalition rather than an LP coalition is what needs to be realized,” he added.

Pangilinan refused to provide more details on the coalition while talks are still ongoing.

It was Senator Bam Aquino, an LP member, who earlier raised the need for a “genuine” opposition slate that he said should be willing to oppose and stand up against government policies damaging to people.

“If you ask me, in 2019, there’s a need for a genuine opposition slate. Kailangan ng mga taong magsasama-sama, magtutulong-tulong para labanan ang polisiya ng administrasyon na nakakasakit sa tao. And I think you will find me on that slate,” Aquino said in a television interview on Monday.        kga