‘Probe Drilon for getting money from Napoles’

Malacañang on Monday said Senate Minority Franklin Drilon should be investigated following the revelation of alleged “pork barrel scam” mastermind Janet Lim Napoles that the lawmaker received millions of pesos in campaign donations during the 2010 elections.

In a text message, Roque said Drilon was not exempted from investigation over allegations of corruption.

“Leave it to DoJ (Department of Justice) but there should be an investigation,” Roque said when asked about Napoles’ allegations against Drilon, a stalwart of the erstwhile ruling Liberal Party.

President Rodrigo Duterte had said Napoles was just a “minimal player” in the pork barrel scam.

Napoles was offered to turn state witness after she was acquitted by the Court of Appeals in the serious illegal detention case filed against her by her second cousin, pork barrel whistle-blower Benhur Luy.

She, however, remains detained as she is still facing plunder charges before the Sandiganbayan, along with her co-accused former senators Juan Ponce Enrile, Jose “Jinggoy” Estrada and Ramon Revilla Jr.

“Let the process of accountability begin!” the Palace official added.

During the intervview, Napoles claimed that she gave money to Drilon for the 2010 polls. 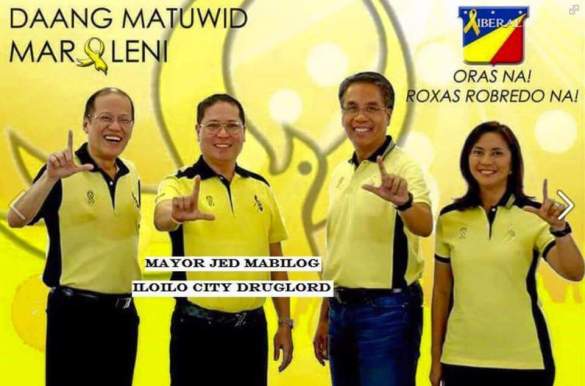 GMA 7 news program “24 Oras Weekend” reported that Vice President Leni Robredo was also at the event, during which she urged party mates not to lose hope.

“These are all card-bearing, committed, non-politician Liberals,” said Baguilat, who led the oath-taking in Naga.

“Many of them applied through the party’s newly launched online recruitment platform. They are a mix of professionals, from various sectoral groups, millennials, seniors, etc. who are fed up with this administration’s abuse of power, and who are looking for a space to come together and resist,” he added.

“Tayo sa Liberal Party, we have been through hell and back. And we in the Liberal Party, to borrow and paraphrase the words from the poet Dylan Thomas: ‘We will not go quietly into this dark night,’” he added.

Since the party was founded in 1946 by former President Manuel Roxas, three Philippine presidents  came from the LP. — DVM, GMA News

MANILA – (UPDATE) The Mayon Volcano shot what appeared to be a huge ash column on Monday, the second in over a week and as authorities braced for a possible “hazardous eruption.”

Some 27,000 people have been evacuated around the volcano that is renowned for its perfect cone.

The alert level was raised to level 4, one notch below the highest warning. This indicates a “vulcanian eruption” is ongoing.

Alert level 3 was raised over the volcano on Jan. 14. It is the third highest in a five-step warning system.

Mayon draws thousands of tourists, even during minor eruptions, rises 2,460 metres (8,070 feet) above a largely agricultural region some 330 kilometres southwest of Manila.

It is considered the nation’s most active volcano.

Steam-driven eruptions and rockfalls began earlier this month, and the crater began glowing soon after, in what Phivolcs said was a sign of the growth of a new lava dome.

Everyone knows how difficult it is to get an appointment at the Department of Foreign Affairs to apply for or renew your passport. Although there is the department’s head office and 27 satellite offices in and outside of Metro Manila, appointment schedules are full until March. There are even those enterprising applicants who’ve had to drive or fly to another province just to get the hardest government-issued document to come by. And this has been going on for quite a bit, leaving the DFA with nothing to do but explain, before things get out of hand.

MANILA, Philippines — The Department of Foreign Affairs (DFA) will increase passport application slots and boost its capacity in the coming months to address the huge backlog.

In a press conference in Pasay City yesterday, Foreign Affairs Secretary Alan Peter Cayetano also denied that a syndicate involving some DFA personnel and travel agencies is behind an “extortion” operation, referring to the P5,000 fee collected from applicants who want to get a passport appointment at an earlier date.

He said the DFA has removed since last year the reserved slots allotted for travel agencies. It was during that time, he added, that the selling of appointment slots was possible because the travel agencies were allotted 1,200 slots a day.

“We’re not saying it’s impossible that there are fixers who claim (now) that they have slots. Anybody can say anything. What I’m saying is they (travel agencies) have no reserved slots, so they can’t sell anything to you,” Cayetano explained.

“The key is to increase the capacity. If we have increased capacity there’ll be no problem,” the secretary said, noting that the agency is facing a backlog of 400,000 to one million passports.

Cayetano led yesterday the launching of the new Philippine passport with 10-year validity at the DFA-Office of Consular Affairs in Parañaque City.

President Duterte signed in August last year the law extending the Philippine passport validity to 10 years, doubling its previous lifespan of only five years. However, applicants aged 18 years and below will continue to be issued the five-year passports.

Submit a list of drug pushers in your area or face ax.

This was newly-appointed Department of the Interior and Local Government (DILG) undersecretary Martin Diño’s new directive to barangay (village) officials as he vowed to step up their involvement in the government’s massive campaign against illegal drugs.

“I will make sure that all the barangays all over the Philippines will be fighting against illegal drugs,” Diño said in an ambush interview on Tuesday.

Diño was present at the turnover ceremony of the now Dangerous Drugs Board (DDB) chairman Catalino Cuy to the newly-minted DILG officer in charge Eduardo Año at the DILG National Police Commission (Napolcom) in Quezon City.

“I will ask all the barangays to submit a list of suspected drug pushers, suspected criminals in their respective barangays. This time, may sanction kapag hindi nakapagsubmit (if they don’t submit),” Diño said.

He said he will consult his legal team about the sanctions the DILG could impose against non-compliant barangay officials.

The Department of Health has recently informed manufacturer Sanofi of its plan to return about a BILLION pesos worth of the UNUSED vaccine doses (a total of PHP 3 BILLION worth was purchased by the Philippine government). The National Bureau of Investigation and the Public Attorney’s Office are conducting exhumations and autopsies of previously vaccinated children who may have died of DENGUE LIKE symptoms (usually bleeding in the intestines, brain, heart and lungs) in an effort to prove that the vaccine, indeed, caused the deaths (directly or through the exacerbation of what was supposed to be a lesser gravity of the clinical course).

At least 7 autopsies have been done on the current total of 14 suspected deaths. The public has already been informed to report other possible cases so that the proper examinations and verification can be performed.

Death of 5 children linked to Dengvaxia

By: Maricar Cinco- Correspondent / @maricarcincoINQ
Philippine Daily Inquirer January 11, 2018
SAN PEDRO CITY — Officials in Cavite and Laguna provinces are monitoring the health of thousands of schoolchildren who have been inoculated with Dengvaxia after forensic experts from the Public Attorney’s Office (PAO) reported having found a “link” between the deaths of five children and the controversial dengue vaccine.

Dr. Erwin Erfe, director of the PAO Forensic Laboratory, said on Wednesday that the latest to be subjected to forensic examination was the body of a 13-year-old boy who died in Bulacan province on Jan. 3.

The forensic examination was conducted in Sampaloc, Manila, on Wednesday morning with consent from the boy’s parents, he said.

“[W]e found massive bleeding in the brain. There’s a lot of blood in the scalp, [in] the heart, lungs and in the stomach,” Erfe said in a phone interview.

Earlier, Erfe said the examiners had observed a pattern in the death of five children who had been inoculated with Dengvaxia.

The PAO on Tuesday examined the body of an 11-year-old boy from Bataan province. Erfe said the boy died “within 12 hours” of developing headache and fever.

Among the bodies examined by the PAO experts were those of Zandro Colite, 11, from Cavite, and Lenard Baldonado, 10, from San Pablo City in Laguna.

Baldonado’s body was exhumed and subjected to forensic examination on Jan. 7 in San Pablo.

The PAO experts also found bleeding in the lungs and enlarged organs in Baldonado’s case.

Soriano confirmed that Colite was among the schoolchildren inoculated with Dengvaxia  under a Department of Health (DOH) P3.5-billion immunization program that had been run with the Department of Education.

The DOH halted the immunization drive last Dec. 1, three days after Sanofi Pasteur, the French pharmaceutical company that developed Dengvaxia, announced that the vaccine worsened symptoms in vaccinated people who had no previous exposure to the dengue virus.

More than 830,000 schoolchildren had already received at least one dose of Dengvaxia before the DOH stopped the immunization program.

In Cavite, records from the provincial health office showed that 68,366 schoolchildren had received the first dose of Dengvaxia, while 37,966 had received the second dose and 36,860 had completed the three doses.

Soriano said the health of the children was being monitored. So far, he said, Colite’s case was the only one in the province linked to the controversial vaccine.

In Laguna, thousands of schoolchildren aged 8 to 14 also received the vaccine between 2016 and 2017.

Dr. Rene Bagamasbad, the Laguna provincial health officer, said many more received the vaccine at private hospitals, Baldonado most likely among them because his name did not appear in the records of the government’s immunization program.

Aside from Baldonado’s case, Bagamasbad said an 11-year-old boy from Lumban town who received the full dose of Dengvaxia was hospitalized from Dec. 10 to 15, 2017, after showing symptoms of dengue. The child survived.

On Tuesday, Erfe said the children who fell ill after receiving Dengvaxia suffered from internal bleeding and enlarged organs and all died six months after they had been inoculated.

Among those examined were 10-year-old Anjielica Pestillos, who died last Dec. 15.

But initial forensic examination showed she had an enlarged liver, which weighed more than a kilo—not normal for a 10-year-old, Erfe said.

He said the girl also had enlarged kidneys and spleen.

Erfe said the children died soon after they showed symptoms of severe dengue.

The latest to be examined were 13-year-old Rei Jazzline Alimagno and 11-year-old Alexander Jayme, Erfe said.

Erfe said both showed symptoms of severe dengue and while their organs were normal in size, they had suffered from bleeding in the brain.

Jayme, he said, had suffered from bleeding not only in the brain but also in the stomach, lungs and liver. Even the boy’s scalp showed traces of blood, he said.

“They all have fever and rashes and they were all inoculated with Dengvaxia,” Acosta said.

Health Secretary Francisco Duque III said on Wednesday that the DOH welcomed the PAO investigation, and offered to “extend any help in unveiling the truth.”

“Our panel of independent experts and the Philippine General Hospital have been tasked to monitor adverse events following immunization. We see [the] PAO’s efforts as complementary to our own and we would like to see the results of their probe,” Duque said. —With reports from Tina G. Santos, Tetch Torres-Tupas, and Faye Orellana