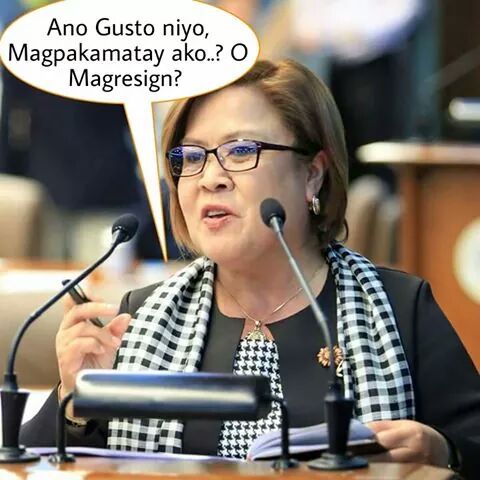 MANILA – Theoretically, Senator Leila De Lima is not immune from arrest if the Court issues a warrant on supposed drug charges to be filed by the Department of Justice (DOJ), Senate President Aquilino “Koko” Pimentel III said on Wednesday.

In an interview, Pimentel said that all senators including him and De Lima enjoyed immunity from arrest if the punishment on the case is not more than six years imprisonment.

“Okay, eto theoretical na lang, if a senator has a criminal case, a pending criminal case filed before the Prosecutor’s Office, before the court, the court issues a warrant of arrest, which involved imprisonment of more that six years, no exemption,” Pimentel explained.

Pimentel said that the Constitution does not speak of their exemption from arrest even if they enjoy some immunity and privileges under the law.

“But then even the privilege from arrest we do not enjoy if it’s beyond six years,” Pimentel said.

Pimentel further stressed that a senator cannot be arrested while Congress is in session.

De Lima confirmed that a warrant of arrest may be issued by a court against her for the drug charges, which is not bailable, to be filed by the DOJ before a regular court, and thus, bypassing the Ombudsman and the Sandiganbayan.

“I’m sure they will find a way to make it non-bailable. In fact, they were emphasizing the drug trafficking angle yesterday (Tuesday) to make the case fully cognizable by the regular court,” she added.

De Lima was talking about the four consolidated cases, filed by Volunteers Against Crime and Corruption (VACC) together with former National Bureau of Investigation officials Reynaldo Esmeralda and Ruel Lasala and New Bilibid Prison inmate Jaybee Sebastian, which were consolidated by the DOJ.

The second set of cases, De Lima said, was about the accusation made by Kerwin Espinosa against her regarding the drug payola and campaign funds she received before she ran for senator.

De Lima said that she has no immunity from arrest since the case/s that will be filed are for violation of the Comprehensive Dangerous Drugs Act and the Anti-Graft and Corrupt Practices Act.

“Walang immunity. It is in the Constitution, I am sure of that. There is a minimum penalty and certainly itong mga so-called charges sa akin na drug trafficking kuno, violation of the Comprehensive Dangerous Drugs Act and Anti-Graft and Corrupt Practices Act kasi mixed na cases yan,” De Lima said.

With this, De Lima expressed hope that the Court of Appeals will issue a temporary restraining order (TRO) questioning the jurisdiction of the DOJ over her alleged cases.

In her petition for prohibition and certiorari, De Lima urged the CA to stop the proceedings at the DOJ and nullify the actions of the panel of prosecutors which she said are tainted with grave abuse of discretion.

In her petitions filed last Jan. 13 and 30, De Lima noted the obvious bias of Justice Secretary Vitaliano Aguirre as she sought the transfer of the cases to the Ombudsman, which has exclusive jurisdiction over cases against incumbent and former government officials.

She said that her legal team is already preparing for any eventuality, whatever would be the appropriate pleading to be filed, either with the Regional Trial Court, the Court of Appeals and even to the Supreme Court.

“So there are, I think, still available remedies but ang pinaka-tama sana is yung aksyunan na ng Court of Appeals yung two motions ko na to resolve my prayer for a TRO because I raised very substantive and valid grounds,” she said.

“The case would be under the exclusive jurisidiction of the Sandiganbayan. Kapag Sandiganbayan, Ombudsman dapat ang nagpi-PI, nagpi-preliminary investigation,” she said.