Duterte got an estimated crowd of 700,00o supporters to 1,300,000 people in his Miting De Avance held in Luneta. Mar Roxas had 20,000 to 30,000 participants in his rally in the Quezon Memorial Circle. Binay had 10,000 people in his event held in Makati while Poe had 5,000 people in Plaza Miranda. Santiago had 400 guests in her activity in their West Tiangle office in Quezon City. Aside from the massive mobilization of the Duterte forces, the rest of the presidential candidates could not mount credible numbers proportional to their poll survey results. The number of participants in the culminating rallies could be an early indication of a possible Duterte landslide considering that both President Aquino and his anointed one, Mar Roxas, made last-minute calls to the other candidates (Poe, Binay and Santiago) to form an alliance against the front runner Davao City Mayor Rodrigo Duterte. Nothing followed the so-called unity call (which would have entailed Poe and/or Binay and/or Santiago withdrawing from the president race in favor of the Aquino Administration candidate Mar). 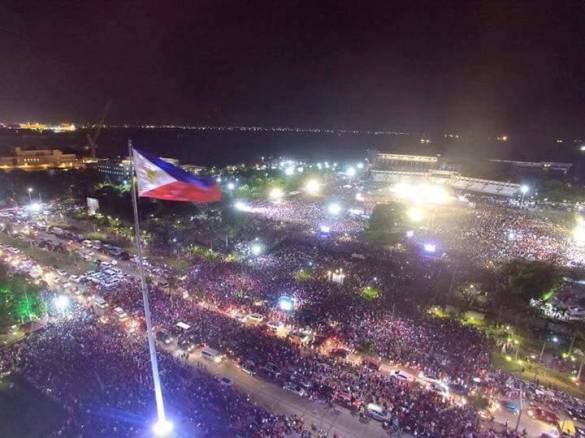