The Commission on Elections voted to THRASH the appeal or motion for reconsideration of Senator Grace Poe on the issues of her natural-born citizenship status and her mandatory 10-year Philippine residency in connection with her Certificate of Candidacy (COC) for the position of President of the Philippines. The Comelec 2nd Division had earlier voted against her with a 3 – 0 vote while the 1st Division voted 2 – 1 also against the number one senator in the 2013 mid-term elections. Presidential elections would be held in May 2016. Both Comelec Divisions thus voted to cancel her COC, in effect, DISQUALIFYING her from the race. With a negative vote of the Comelec EN BANC, her final option would be to bring her case up to the Supreme Court.

Senator Grace Poe held the popularity surveys or polls lead for a few months until Davao Mayor Rodrigo Duterte seized the lead from her. The latest survey also showed the resilient Vice President Jejomar Binay recapture the Pulse Asia lead. The former Makati Mayor had the lead for many years because he was the only declared candidate (from way back 2010 right after he assumed the VP 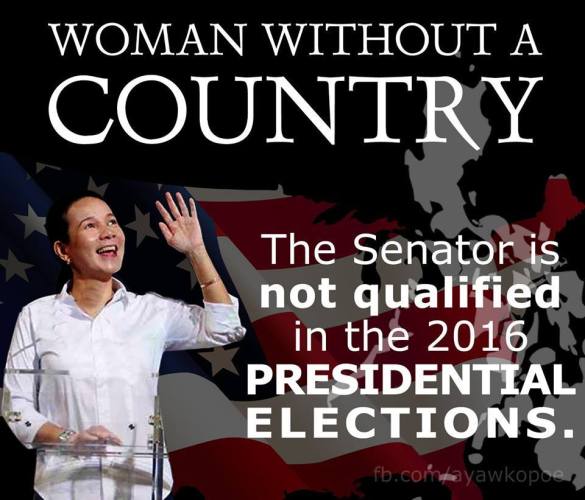 office) for the Presidency but lost popularity after he was implicated in graft and corruption charges. With Poe losing steam because of her candidacy-related troubles, Vice President Binay and Mayor Duterte (who is also facing a disqualification case) seem poised to slug it out next year. Chronic TAIL-ENDER former Senator Mar Roxas is still trying hard to improve his ranking and is banking on a DISQUALIFICATION (Poe) or DOUBLE DISQUALIFICATION (Poe and Duterte) to have a fighting chance against VP Binay (who may land in JAIL before election day if the Liberal Party plans work).