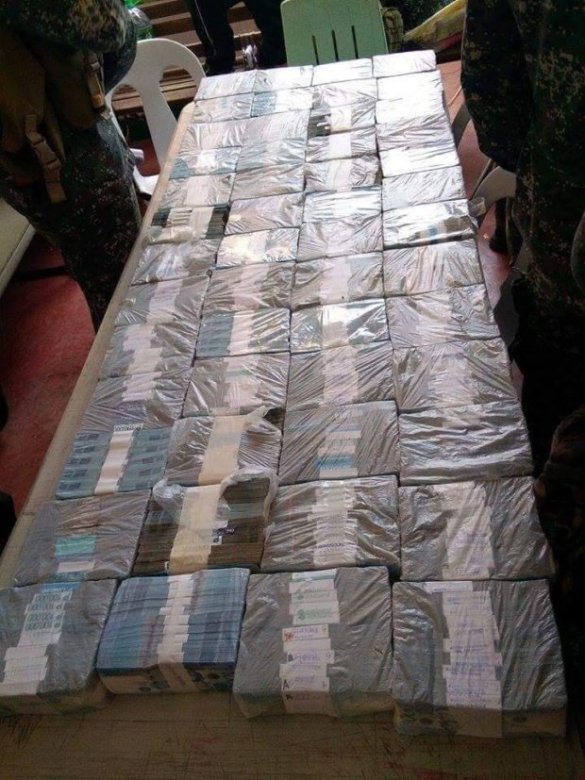 P79-M worth of checks, cash found by PH Marines in Maute lair

Members of the Philippine Marines on Monday recovered P79 million in cash and checks from a house that used to be a sniper position of the Maute Group in Marawi City.

A total of P27 million worth of checks and P52 million worth of cash in bundles were discovered in one of the houses in Barangay (village) Mapandi during the clearing operations of some troops of the Marine Battalion Landing Team 7 on Monday.

There will be an investigation as to where the money came from, Ltc. Jo-ar Herrera, spokesperson of the Army’s 1st Infantry Division, said in a press briefing Tuesday.

“We will not speculate here. We will wait for the facts after the investigation,” he said.

The Marawi crisis reached its 15th day on Tuesday and nearly 200 people have been killed and thousands have fled.

But the recovered cash and checks may indicate that the Maute group is on the run.

“The government troops are sustaining… The recovery of cash indicates the Maute is running and the troops are pressing in,” Herrera said.

The gunbattle started with the military’s botched raid against Abu Sayyaf senior leader Isnilon Hapilon but reinforcements from the Maute Group came.

Hapilon is also reportedly the emir of the Islamic State in Southeast Asia. IDL/rga

MANILA – (UPDATED) State forces discovered Monday at least P79 million in cash and checks in a house in Marawi City after retaking a stronghold of the Maute fighters they have been battling since last month.

The Philippine Marines first found P52.2 million in cash at a house located near the extremists’ machine gun nest in the Mapandi area.

Of this amount, P52 million was wrapped in plastic bundles while P200,000 was stashed in envelopes.
The troops then found checks worth P27 million in the same house, bringing the total amount of the haul to P79 million.

Authorities said the owner of the house was likely among the 200,000 residents who fled from Marawi after Maute and other bandit groups attacked the city on May 23.

Investigators are now looking into the cash and check’s paper trail to confirm if the money is connected to terrorist operations.

The fighting in Marawi has prompted Duterte to place the entire Mindanao island under martial rule.

A presidential spokesman said 120 militants have died in the battle, along with 38 government forces. The authorities have put the civilian death toll at between 20 and 38.

In a media briefing on Tuesday, the spokesperson of Task Force Marawi and Marine officers said ₱52.2 million in cash and P27 million-worth of stale checks were found inside a vault during a house-to-house clearing operation near Mapandi bridge.

Herrera said they requested for an investigation on the cash and checks, and as to who owns the house, which he described as “well-built.”

Marine Major Rowan Rimas said it is possible the house is owned by a Maute member.

“It was under the control of the Maute group because prior to the assault of the troops, there is a gun mount in that area. And our troops were being fired upon,” he said.

He said the recovered cash and checks, including some indicating “pay to cash,” show the Maute group is on the run.

“The Maute group, they have defensive positions. They have a very capable group. But the recovery of  those millions of cash indicate that they are running, because the government troops are pressing in,” he said.

Herrera said based on the location where the machine gun nest was found, “it can be explained very clearly that position was in control of the Maute.”

The money and checks were turned over to the Joint Task Force Marawi for safekeeping.

Government troops have been fightng Maute members in Marawi since May 23. The terrorists resisted an arrest order for Isnilon Hapilon, whom ISIS recognizes as its leader in the country. He is believed to be still in the area.

Hapilon is allegedly working with the Maute group to establish a “wilayat,” or caliphate of ISIS in Lanao del Sur.

President Rodrigo Duterte declared martial law and suspended the privilege of the writ of habeas corpus over the entire Mindanao island region on May 23 in response to the violence in Marawi.