AT least 34 people have been killed after a masked gunman stormed a Manila casino and set fire to gambling tables before burning himself to death.

The horrific death toll was revealed by sources at the Philippine Bureau of Fire Protection, who said most died from smoke billowing out of the flaming tables.

According to reports, the man, who is thought to be a white “English speaker”, raced into the Resorts World Manila complex shortly after midnight and fires at TV screens.

As terrified guests began screaming and running for the exits, the gunman pulled out a can of gasoline, poured it over gaming tables and set it ablaze.

He then stuffed his rucksack with £175,000 of casino chips before fleeing in the mayhem.

Philippine police say a gunman who burst into a Manila entertainment complex, firing gunshots and setting a casino ablaze, has taken his own life.

Authorities said the man’s motive was robbery, and that the incident was not terrorism-related.

Shortly after midnight, shots and loud bangs rang out at the popular Resorts World Manila complex, which is close to close to Terminal Three of Ninoy Aquino International Airport and an air force base.

Mr dela Rosa said the “foreign looking, Caucasian gunman” burst into the casino, fired shots and set gaming tables alight, sowing panic in a country on high alert after martial law was declared in the south.

“He parked at the second floor and barged into the casino, shooting large TV screens and poured gasoline on a table setting it on fire,” he said.

“We are looking into a robbery angle because he did not hurt any people and went straight to the casino chips storage room.

Smoke was seen billowing from the upper story of the complex’s hotel wing hours after the initial assault as police worked to clear the resort room by room.

Hours later, Metropolitan Manila police chief Oscar Albayalde says the English-speaking suspect was found dead around dawn with his rifle on the fifth floor of the Resorts World Manila complex.

The suspect reportedly took 113 million pesos ($3 million) worth of gambling chips, which were found in a bag he was carrying.

Mr Abayalde said there was no indication of terrorism, and that authorities believe the suspect either lost in the casino and wanted to get his money back, or went “totally nuts”.

Officials said at least 54 people were hurt, some seriously, as they rushed to escape what at first had been feared as a militant attack.

Large numbers of police massed outside as smoke rose from the hotel and shopping complex, which according to its website holds the largest casino resort in the country.

Resorts World Manila said on social media it was in lock down.

Witnesses at the scene reported armed police entering a hotel near the complex, while videos posted earlier on social media showed people fleeing as several loud bangs were heard.

People caught up in panic following the incident were being treated at a nearby hospital for smoke inhalation and fractures, hospital staff said.

The Philippines has been on heightened alert amid a crisis in the south of the country, where troops have been battling Islamist rebels since May 23.

President Duterte has said he fears Islamic State’s “terrible ideology” will spread on Mindanao, an island of 22 million people, and has warned it could become a haven for supporters fleeing Iraq and Syria.

Dela Rosa, who earlier claimed that the gunman was killed after resisting arrest, said that the suspect set himself on fire in one of the rooms at the hotel.

Earlier, the police chief said the gunman was a foreigner, a Caucasian who appeared to stand six-foot tall.

He, however, denied reports that the international terror group ISIS was responsible for the attack.

“There is a lone man who entered the second floor of Resorts World Manila. He was carrying an M4 rifle and he burned gambling tables. He did not shoot anyone,” Dela Rosa said in an interview with reporters at the police command center in the hotel complex.

Police are eyeing robbery, not terrorism, as motive behind the shooting for the suspect stole P130 million worth of casino chips.

Police, composed of members of Special Action Force (SAF) and Special Weapons and Tactics (SWAT), are still in the area. IDL

The Philippine National Police released screenshots of the lone gunman that went on a rampage at the Resorts World Manila in Pasay City early Friday morning. 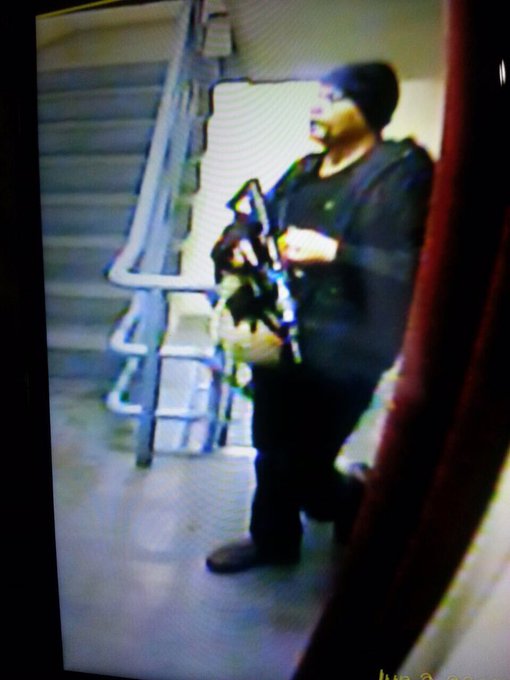 The still unidentified gunman was seen wearing a bonnet, a gray sweatshirt, and armed with a “baby Armalite”.

Authorities have yet to confirm the gunman’s identity and nationality as he burned himself to death in a Maxims Hotel room.

Police chief Ronald Dela Rosa ruled out terrorism as the motive of the attack as the suspect neither threatened nor harmed civilians.