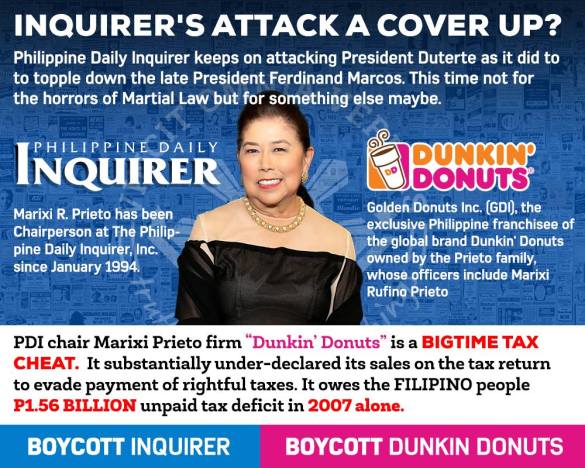 MANILA, Philippines – President Duterte yesterday issued threats against two news organizations that he accused of “crucifying him” as he ranted about the supposed corruption in Philippine media.

Duterte threatened to block the franchise of broadcast giant ABS-CBN and vowed to recover a government property that he said is now with the owners of broadsheet Philippine Daily Inquirer.

The President accused ABS-CBN of swindling, saying the network received his payment for airtime during election campaign period but did not air his advertisement.

“What you did to me was estafa, swindling. Not only me but (Sen. Francis) Chiz Escudero, there are many of them and you duped them,” Duterte told reporters at Malacañang.

“So I will file a complaint. Congress, no need to renew it. But to operate? That’s something else. So I will point this out, your garbage, then we’ll see,” he added.

Asked if he would block the franchise of ABS-CBN, which is now pending in Congress, Duterte said: “Yes. If you do that, you are engaged in swindling. For all you know, how many companies have paid you but you did not air their ads?”

“If you operate an ABS-CBN and then you dupe people, you engage in swindling. I have to stop you right? If you swindle people, what will I do?” he added.

Duterte also vowed to get back within six months the government property now in the hands of the owners of the Inquirer.

“The oligarchs, the number one among them are the Prietos, the owners of Inquirer. You can be sure that I will proceed with you harshly. Or return the property of the people. How much did you pay for it? Maybe just one peso,” he said.

Duterte said the “Mile Long” property in Makati is owned by the Rufinos who are connected to the Prietos through marriage.

“I assure you after all of these things here, I will start to recover what is government property, including that Inquirer. The loudest, one of the loudest of all,” the President said.

Duterte also accused the newspaper of being a phony crusader and a crony.

“From Marcos crony to Aquino Corazon, you are cronies. You’ve always been a crony. And it has long expired, the lease of that property,” he said.

Duterte claimed the Prietos had a P1.5-billion tax deficiency but former internal revenue commissioner Kim Henares allowed them to get away with it with a payment of only P8 million.

“You have to return and you have to pay your taxes. P1.5 billion… there is a pending case in the ombudsman. And I urge the ombudsman also to fast- track the case because it is property owned by the people,” the President said. “By this time the income of that property should be going to the National Treasury. We will run after them.”

There were no comments from the two media organizations as of last night.

Note: 1) The PHP 1.5 BILLION tax deficiency case allegedly settled by the Prietos for PHP 8 million during the time of BIR Commissioner Kim Henares involves Dukin Donuts, a firm owned by the Prieto family who are also owners of the Philippine Daily Inquirer 2) John Nery is the editor in chief of Inquirer.net (online) and not of the Philippine Daily Inquirer (printed edition).