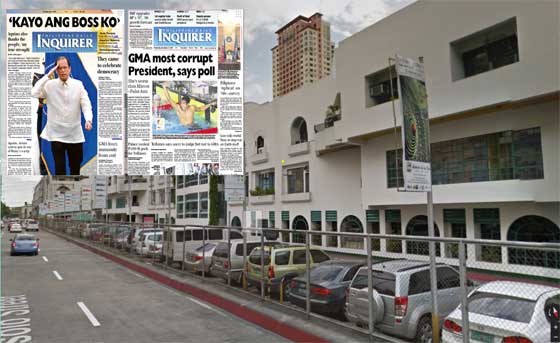 Including Dunkin’ Donuts P1.5B, that’s P3B
RENT on the state-owned prime Makati property called the Creekside/Mile Long complex which the Rufino/Prieto family, the main owners of the Philippine Daily Inquirer (PDI), owe government—but to this day have not paid—would total a mammoth P1.8 billion, computed up to May this year, according to a government suit filed in 2009.

(The PDI’s main, controlling owners are the Rufino/Prieto family with 75 percent. The next biggest shareholder, with 25 percent, is a firm set up using the pension fund of PLDT, which Indonesian magnate Anthoni Salim controls.)

If government’s claims are valid, and its figures accurate, the Rufino/Prietos’ liabilities through their firm Sunvar Realty and Development Corp. would be this P1.8 billion, plus the P1.5 billion alleged tax evasion by another firm they own, Dunkin’ Donuts. That would total nearly P3 billion, putting them in the league of Chinese-Filipino tycoons notorious for being tax evaders.

No wonder President Duterte himself angrily said in a recent speech that he will investigate the case, which was reported to him as having been a “sweetheart deal” when it was leased by a state firm to the Rufino/Prietos’ firm Sunvar Realty Development Corp.

The P1.8 billion figure is based on what then President Arroyo’s Solicitor General Agnes Devanadera in 2009 through the metropolitan trial court asked Sunvar to pay, using figures determined by the government’s Privatization Management Office that had taken over the property. This consists of ₱630 million for the “illegal and unauthorized” use and occupation of the property from 2003 to March 31, 2009, and ₱10.4 million per month from April 2008 until the property was surrendered to government.

The property was originally leased to the Prieto firm in 1980 and 1983, allegedly at a scandalously low rental by the Technology Resource Center Foundation, controlled at the time by Imelda Marcos. The lease expired in 2002, although the Prietos continued to control the property as if nothing happened, and refused to vacate it.

If you think that P1.8 billion figure is unbelievably huge, consider the following. The Rufino/Prieto firm continued to control the 29,000-square meter prime commercial property in Makati (between Amorsolo and Chino Roces Avenue, valued now at about P6 billion) and collected rentals from the over 400 stores there for 14 years, after its lease expired in 2002. That P1.8 billion amount translates to a measly rent of P360 per square meter per month government is asking Sunvar to pay—a give-away price in a prime area where rents are at least P50,000 per sq. m. per month.

Country of oligarchs
Can you imagine anywhere else in the world where a rich family manages to control a government-owned urban prime property, and sublease it to businesses, even if its lease had ended 14 years ago? What a country ruled by oligarchs! Or perhaps as I pointed out in my previous column: such is the power of media in the Philippines.

For reasons unexplained or perhaps expected, the case dragged on that government asked the Supreme Court for help, which issued a decision in June 2012 that practically said the Rufino/Prieto firm should pay ASAP what it owned the state, since it didn’t even challenge the “factual issues” of the case:

“The Court notes that respondent Sunvar has continued to occupy the subject property since the expiration of its sublease on 31 December 2002. The factual issue of whether respondent has paid rentals to petitioners from the expiration of the sublease to the present was never raised or sufficiently argued before this Court. Nevertheless, it has not escaped the Court’s attention that almost a decade has passed without any resolution of this controversy regarding respondent’s possession of the subject property…

The Court emphasizes the duty of the lower court to speedily resolve this matter once and for all, especially since this case involves a prime property of the government located in the country’s business district and the various opportunities for petitioners to gain public revenues from the property.”

Only in the Philippines: Even with the order of the Supreme Court, it still look three years for the lower court to issue a decision. Metropolitan Trial Court Judge Barbara Aleli Briones in July 2015 ordered the Rufino/Prieto firm to pay up, although she reduced the amount to P555 million, 30 percent of the P1.8 billion government asked.

Sunvar would certainly go bankrupt if it is asked to pay just that P0.6 billion, as its assets amount to only P400 million.

In a country where there is a rule of law, and perhaps where even the most powerful media firm is treated just like any other firm, the Rufino/Prieto firm would have paid up immediately, and the story would have ended.

Next court levels
But not in the Philippines. The Rufino/Prieto firm filed several cases in the next levels of the court system, all of which did not question the facts of the case but merely raised such obscure technicalities as the metropolitan court’s jurisdiction and the need to consolidate all cases—which the company itself filed.

The orders last year up to March 2017 of the judges involved—Makati Regional Trial Court Branch 141 Maryann Corpus-Manalac and MRTC Branch 59 Judge Winlove Dumayas—have in effect allowed the Rufino/Prietos, to maintain the status quo—to control the property, collect rents from businesses there, and ignore government’s decade-long effort to collect P550 million to P1.8 billion from this billionaire clan.

Isn’t it uncanny that the efforts to reclaim the Creekside/Mile Long property started during the watch of President Macapagal-Arroyo, whom the PDI demonized, were practically suspended during the entire term of President Aquino, whom the paper unabashedly idolized and supported? And that the first real court decision on the matter was in July 2015, when Aquino just had a year to go?

Guess who really gets to appoint judges to higher level, even up to the Supreme Court? Such is the sad state of our institutions.

It would be so tragic if after fourteen long years, government because of sheer incompetence fails to recover a prime property and to get its rent from one of the richest clans in the country have managed not to pay.

What would the hundreds of thousands of urban poor squatters in the metropolis say when riot police try to eject them? “Why us poor, not the rich squatting on prime government land?”