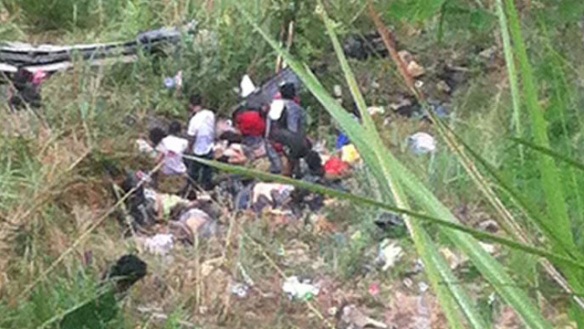 CAGAYAN, Philippines (4th UPDATE) – At least 26 people were killed and around 20 injured in a bus crash in Nueva Ecija on Tuesday morning, April 18.

Senior Inspector Robert de Guzman, Carranglan town police chief, said in a phone interview that 24 people died on the spot after a Leomarick Trans bus fell into a ravine in Capintalan village in Carranglan, Nueva Ecija, around 11 am Tuesday.

De Guzman said in a follow-up interview that two more died later on.

The police chief said the injured passengers, initially placed at 22, were brought to hospitals in Bayombong, Aritao, and Bambang towns in Nueva Vizcaya; and San Jose City and Cabanatuan City in Nueva Ecija.

The bus was traveling from Isabela province to Candon City in Ilocos Sur when its brakes failed while traveling on a winding road.

“When we responded, we just found the bodies lying in the accident area, lifeless,” the town police chief told Rappler in Filipino.

He added that the bus was a “total wreck” after falling into the 80-foot-deep ravine.

Based on the initial investigation, De Guzman said the bus driver was speeding and even overtook vehicles before the crash.

He said the police have yet to release information on the identities of the victims as authorities could not yet retrieve the victims’ personal belongings.

Carranglan Mayor Mary Abad told ABS-CBN television there were 60 passengers onboard although the bus had a capacity of only 45.

Abad added the wounded, some of whom sustained critical injuries, were rushed to nearby hospitals.

“The road is really risky. There are many ravines along that road going to Abra,” Abad said, referring to the northern province where the bus was headed.

Dr. Arlene Jara, chief of the nearby provincial hospital treating the wounded, said children were among those injured.

Malacañang conveyed its condolences to the families of the victims and promised to hold accountable those responsible for the tragedy.

“We guarantee that the culprits behind the fatal bus mishap will be held accountable,” Presidential Spokesperson Ernesto Abella said in a statement.