With President-elect Davao City Mayor Rodrigo Duterte subjected to “intensive grilling”  by media outlets, Digong has called it quits and declared he would no longer be available for interviews. This came about during the presentation of his incoming cabinet where an open forum turned “unpresidential” with Digong displaying his vintage gutter language. The main event was when he cat-called or whistled at a female reporter. Women’s rights activists took him to task as this latest incident was only a few weeks removed from his infamous rape joke. Together with his November 30, 2015 Pope cussing, the three incidents have poured gasoline to the fire of hatred directed at the non-traditional politician who captured the hearts and minds of the Filipino electorate with his crusade against drugs, crime and corruption.

The second press conference had more of the same as reporters ganged up on him again to elicit some semblance of remorse or a formal apology. Digong came out fighting in trying to talk himself out of an obviously politically incorrect situation. Attempting to hair split whether the whistling was a form of sexual harassment or not, even Duterte supporters thought the situation would have subsided if only Digong had humbled himself before the clearly hostile interviewers. Local and international news organizations raised the issue of a MEDIA BOYCOTT perhaps to brow beat the incoming President into submission. Duterte was NOT to be INTIMIDATED and turned the tables on mass media by refusing to do interviews (up to the end of his term, he says). President Duterte says he would just make use of the government media outlets specifically PTV-4  to communicate with his constituents.

So as the situation on the ground stands, the media practitioners are located OUTSIDE of the DPWH Building in Davao that is now being used as the official venue of the Presidential transition team. As an ultimate insult to the mighty radio, TV and printed newspaper outfits, they now have to rely on social media posts (specifically Facebook and Instagram) to keep track of the comings and goings in the meeting place. All through the campaign, the Digong team constantly complained of UNFAIR and BIASED reporting which is the reason Digong took to FREE social media to send his message to millions of voters (aside from lack of campaign funds). 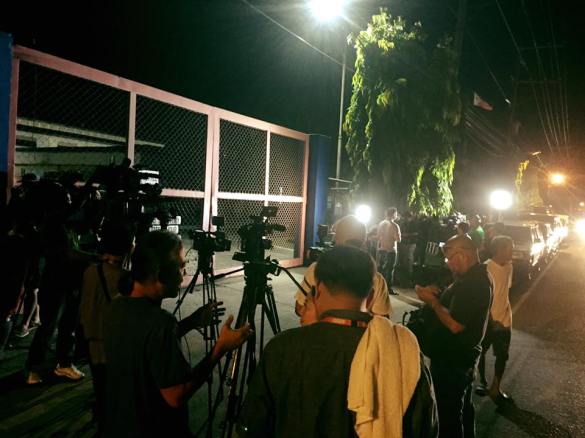 3 thoughts on “DUTERTE: Mainstream Media – Outside the Kulambo”