Philippine President Benigno Aquino lll lashed out at social media, specifically FACEBOOK in obvious frustration over criticisms received by his Administration. On his sixth year in office and due to step down in June 30, 2016, the second-generation (son of President Cory Aquino) Chief Executive is DESPERATELY campaigning to have his Liberal Party mate former Senator and Department of the Interior and Local Government Secretary Mar Roxas replace him in national elections on May 2016. Mar Roxas, who lost his bid to become Vice President in 2010, is currently running FOURTH in poll surveys. Clean and honest elections in 2016 would almost certainly make Davao Mayor Rodrigo Duterte (who just recently seized the number one slot), Senator Grace Poe (survey front-runner for a few months back) and Vice President Jejomar Binay who had declared his intentions as far back as 2010 (who was survey front-runner for years prior to graft and corruption charges hurled against him).

Senator Grace Poe was DISQUALIFIED by a Comelec division with an appeal for a Comelec en banc decision. Should Senator Poe lose out on this one, she can bring the case up to the Supreme Court. Her case is about her natural-born citizenship status and the mandatory 10 year residency period in the Philippines prior to the May 2016 elections.

While Senator Poe has a Philippine CONSTITUTIONAL problem, Mayor Duterte has an election PROCEDURAL issue considering he did not file his Certificate of Candidacy during the prescribed period so he is now using the SUBSTITUTION CLAUSE to run for President.

Vice President Binay has been hounded by graft and corruption issues for many months now so there is also a chance that the Aquino Administration can get him out as a candidate with the use of the Department of Justice and the Ombudsman.

In other words, President Aquino is banking on Mar Roxas to win on the basis of having NO OPPONENT (unless we count the cancer-stricken Senator Miriam Defensor Santiago as a worthy election adversary).

With so many possibilities of candidates being excluded from the ballot list or candidates having ASTERISKS (*) beside their names to mean an election protest is on-going, P-Noy is hoping, praying and pleading for a Mar Roxas victory no matter how the win comes about. Of course, there is the issue of election cheating using the PCOS (counting machines) but that is another story.

President Aquino bashes Facebook because it is an arena he can not control. Mainstream media (newspapers, radio and television) have paid advertisements to deliver his message of good performance and a call for Mar Roxas to continue his programs. This situation favors the well funded candidates. There are also paid HACKS who dominate opinion columns and news reports. Facebook is relatively new and DIFFICULT to control. As this blog has always stated, FACEBOOK WOULD DECIDE the next Philippine President in 2016. 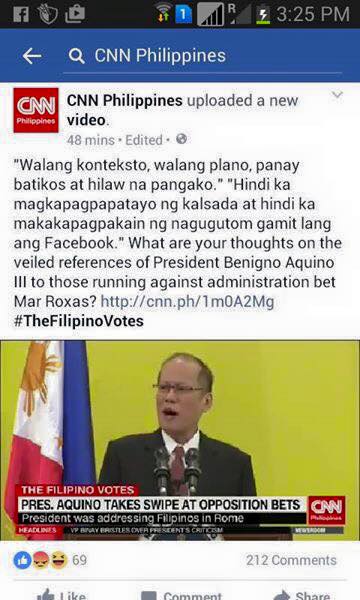