Senator Miriam Defensor Santiago and Davao Mayor Rodrigo Duterte are two politicians very well known for their strict governance, but because Miriam’s popularity is already on the decline, will she really sacrifice her desire to become President and just support Mayor Rodrigo Duterte instead?

Rumors are circulating in the Internet about the forthcoming withdrawal of Senator Miriam Santiago for the Presidency this 2016 to give way to Davao Mayor Rodrigo Duterte. According to some supporters of Mayor Duterte, they are already sure that Miriam Santiago is going to give her support to Duterte because they both care for our country. “We know that Miriam is already not that popular and the best strategy is to pass her supporters to Mayor Rodrigo Duterte and we believe that she is going to to this because she really knows that she is going to lose again in 2016”, one of the supporters of Mayor Duterte said to our source. This was posted by Eusebio Dabawenyo on October 2015, sharing the Duterte master plan for the 2016 election. Everything has already happened except for the withdrawal of Santiago.

This latest news is not yet confirmed by the camp of Senator Santiago. Duterte decided to run for presidency this 2016 because he feels that Senator Grace Poe is destroying the law, as she is not really qualified to run for the presidency because she is an American citizen, but she is resorting to dirty ways to make it possible.

Duterte declared his decision to seek the highest position in the land while he was in Cavite.

Senator Miriam Defensor Santiago announced that she has/had Stage 4 lung cancer and she underwent chemotherapy for it. She declared that she is/was cancer-free after the the chemotherapy but she has now refused to comment on her current medical condition. Unconfirmed medical reports state that she CURRENTLY has malignant pleural effusion for which she regularly undergoes pleurocentesis (a procedure to remove fluid, in this case malignant, from her chest or lung cavity). If true, this means that her lung cancer in NOT under control and is continuing to multiply with the possibility of lymph node metastasis and/or distant metastasis (liver, brain, bones, etc.). Stage 4 lung cancer is highly lethal with a high mortality rate even with the best currently available treatment modalities (surgery, radiation therapy, chemotherapy, etc.). 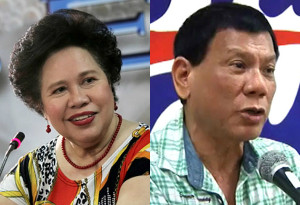