The highly successful It’s More Fun in the Philippines campaign launched years back by the Department of Tourism was a glowing moment in our nation’s travel history. Foreigners as well as Filipinos based abroad were pleasantly surprised at the marketing initiative that received lots of praises. The result was an influx of tourists eager to discover or relive the world famous Filipino hospitality. Today, all the efforts of Tourism Secretary Jimenez seem for naught as international eyes are focused on an extortion scheme that went awry. Had transportation, airport and security officials come out early to admit the problem, it may have dampened the anger of the Filipino public. But in the typical fashion of denying there is a problem to minimizing the existence of one, government bureaucrats, after much finger-pointing and buck passing, found themselves being blamed for incompetence, stupidity or worse. It did not help that Presidential candidate Mar Roxas revealed a conspiracy theory out to destroy the image of the government. Maybe a public relations firm can assign a spokesperson to talk in behalf of the former DILG Secretary so that he (Mar Roxas) would avoid being referred to the veterinary service for FOOT IN MOUTH DISEASE. 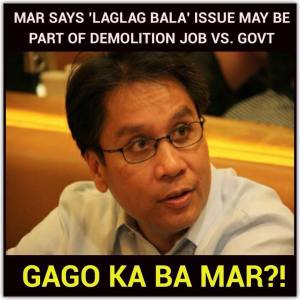 Presidential candidate Mar Roxas declares that the Tanim Bala airport extortion scheme is a DEMOLITION JOB hatched to destroy the image of the government.