Vice President Jejomar Binay submitted an IRREVOCABLE LETTER of RESIGNATION from the Cabinet. In a letter hand-carried by his daughter Makati Representative Abigail Binay and received in Malacanang by Executive Secretary Paquito Ochoa, no reason for the resignation was mentioned. Vice Pre 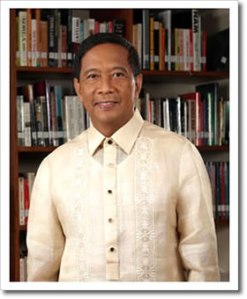 sident Binay had announced long ago his plan to run for President in 2016. The last day for filing of the Certificate of Candidacy would be in October, 2015 and an estimated six Cabinet members (Vice President Binay, as Housing Secretary, included) are expected to resign from the Cabinet since they would be running for public office.

Analysis: As the lone Cabinet member that belongs to the political opposition, Vice President Binay sticks like a sore thumb in the Administration Cabinet. Liberal Party die-hards frequently bash him for “biting the hand that feeds him”, meaning Binay harbors policy views that may run counter to the official Administration line. By resigning this early from the Aquino Cabinet, Vice President Binay can not now be accused of using his Cabinet office resources in aid of his 2016 Presidential Election plans. He would also now be free to ventilate his reform agenda which may at times clash with the prevailing Administration line.