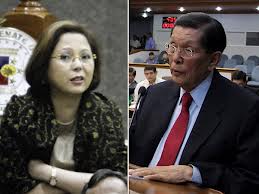 JPE dumps former GF to save his own skin (and we always thought that he is a gentleman). Former Senate President Juan Ponce Enrile has said (through his lawyer) that he did not authorize his subordinates, including former GF (girl friday) Atty. Gigi Reyes, to do business with Napoles NGOs. The move may be laughable, without credibility, ridiculous and unbelievable to the general public but may be brilliant (or the only practical thing to do) from a legal point of view. Enrile would now claim not knowing anything about the Napoles NGOs so he does not have to answer questions about the anomalous transactions. Should Atty. Reyes remain in hiding, she may not have to answer anything either. An in absentia conviction against Reyes can not be enforced if she can not be found while the same GUILTY VERDICT against Atty. Reyes may absolve Enrile of the PLUNDER charge which may be downgraded to a BAILABLE MALVERSATION OR NEGLIGENCE CHARGE. Since the OMBUDSMAN has said that it may take a year before charges are filed with the Sandiganbayan, then Enrile may not spend a single day in JAIL (due to HOSPITAL CONFINEMENT, HOSPITAL ARREST, HOUSE ARREST, OUT ON BAIL, OLD AGE, DYING BEFORE THE TRIAL IS OVER and a whole lot of other scenarios). But, no matter how Enrile escapes JAIL TIME, his LEGACY is in tatters, he will be JUDGED GUILTY by the public today and for all time.
http://balitangbalita.com/

One thought on “JPE dumps former GF to save his own skin (and we always thought that he is a gentleman).”